I believed I got severe sunburnt when drove to Ta Phin Village. Early morning the weather was still very cold and misty, but by afternoon, it turned up to be sunny day, but I forgot to apply any sun screen lotion.
END_OF_DOCUMENT_TOKEN_TO_BE_REPLACED 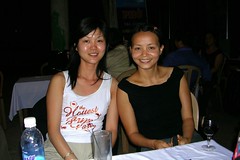 The bus reached Lao Cai at at about 7.30 pm. So we had about an hour to walk around (or more appropriate: waste) in Lao Cai. And the bus driver was smart too. Instead of train station, he stopped the minibus right in front of a cafe. We went to another coffee shop instead, and met with this nice Vietnamese lady Ha. Her husband Culi Cage owns Wide Eyed Tours, now mainly handling tourists from Australia. She shared with us lots of information about how tour agencies in Hanoi work, and helped me to order a rice wine too. The Vietnamese rice wine was pretty too strong for me.

There were a lot of mini buses and vans running to Lao Cai until 4 pm. We also found a few mini buses that run to Lao Cai between 4 – 5 pm, but don’t bet on it. The buses can be found at around the Church and Main Square. I saw a few mini buses who looked for passenger at around Royal Hotel / Mountain View Hotel too. After 4 pm, we didn’t have much choice. Adeline found a hotel (most likely Queen Hotel) that has a bus to Lao Cai at around 5.30 pm. Other than that, the latest bus to Lai Cai was offered by Mountain View Hotel and Royal Hotel. We booked the tickets from Royal Hotel, as we didn’t have pleasant experience with Mountain View Hotel. However, as expected, as sibling hotel, they shared the same bus, with the same price of VND 25,000. 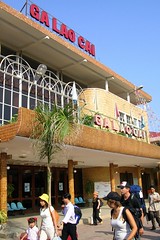 The train LC1 departed from Hanoi at 10:10 pm, and scheduled to arrive at Lao Cai at 7:20 am. But it didn’t arrived until 8:00 am. There was no sign that it’s Lao Cai station, except for this label at the building. Announcement didn’t help much as it’s in Vietnamese, so your best bet will be the warden.
END_OF_DOCUMENT_TOKEN_TO_BE_REPLACED 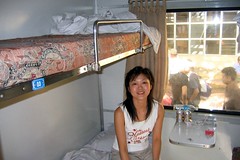 Typical Vietnam Railways cabin consists of 4 soft sleeper berth, 2 upper and 2 lower. A bottle of mineral water and a cake or bun are provided. There are about 10 of such cabin in a train carriage. Besides soft sleeper, there are also hard sleeper, where there are 6 hard sleeper berth in a cabin – upper, middle and lower berth on each side. Basically it’s a soft sleeper without mattress, you’ll sleep on a wooden bed. I also had a glance on a carriage which I believed was hard seat. I initially planned to travel on hard seat class, as it’s so cheap. But I felt lucky I was not, as it’s a wooden chair with separator in the middle which is unable to recline, and 2 person sit on both side of it.

It’s reasonable safe to travel with Soft Sleeper Class on Vietnam Railways. I read that the main consent was the belongings will get stole. But not in our case. In our carriage, there was a Vietnam Railways warden who slept on the carriage herself. Once the train departed from Ga Hanoi train station, she knocked each cabin, and demanded us to stored our luggage below the lower berth, and kept everything valuable under the pillow.
END_OF_DOCUMENT_TOKEN_TO_BE_REPLACED