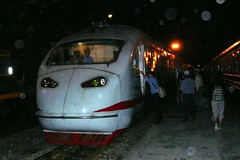 We initially been bought tickets for train LC2, which departs from Lao Cai at 7 pm. We thought it’s too early, so requested it to be changed to a later train. So we boarded SP2 train that departs at 8:50 pm. This SP2 train is more expensive express train service (Luc wanted USD $1 more, but I refused to pay, instead asked him to treat it as a refund for the below par standard of Halong Bay tour). 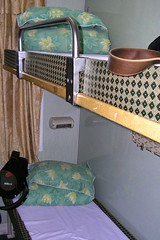 The SP (SP1/SP2) train is more expensive. It’s widely displayed around travel agencies and tour agents in Hanoi as it has a more nicely looking locomotive. So I had quite an expectation for the quality of service and cabin. But it turned out to my disappointment. The bread was less tasty and the mineral water was smaller bottle (Yes, soft sleeper berth comes with a bread and a bottle of water free, everything else extra charge). Beside, the bed was not properly covered. On the positive side is there was personal lamp at each berth, and the wash room was much better than the train we took when coming to Lao Cai, which at times it was locked.