We initially followed the walking tour map for Macau Peninsula, but soon we lost our way as I can’t figured out where were we. So we decided to head straight Dai Sam Ba instead. We asked for direction a few times, and gave me some impression that some Macao Chinese was not so friendly. They simply ignored you, although a lot has been helpful. And with their guide, we finally arrived at the ruins, which, as expected, already has lots of visitors. 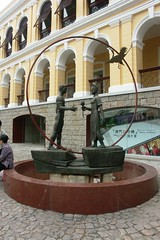 Sculpture (in front of the ruins) at the foot of the Monte Hill (one of the seven hills of Macau) where Ruins of the Church of St Paul located. 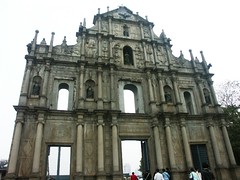 Impressive view of the facade of the Cathedral of Saint Paul. The facade has been described as a ‘sermon in stone’ and a Biblia pauperum, a ‘Bible of the poor’, to help the illiterate understand the Passion of the Christ and the lives of the saints.

This church was constructed under the supervision of Carlo Spinola, a Jesuit from Italy. It basically replaced the Church of the Mater Dei, which was built in 1593 but was destroyed by fires in 1593 and 1602. The construction of St. Paul was completed from 1602 to 1627 by Japanese Christians exiled from Japan, along with the assistance of Chinese craftsmen. The Jesuits were booted out in 1762, and later the complex spent time as a military station. A catastrophic fire in 1835 destroyed everything at the site except for the facade and the monumental stairs. 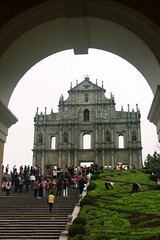 Ruins of St Paul accessible with 66 step of stairs, or the inclined street that parallels the staircase and its adjacent strip of landscaping.

Caved with marvelous relieves, the Sam Ba Sing Tzik (the facade) is divided into four floors. At the top of it stands aloft the Cross, underneath which is again subdivided into three storeys. In the niche of each floor, a bronze statue cast by the Macau cannon manufactory is stored.

Under the Cross, there is a bronze pigeon or dove, representing the holy god (or holy spirit), and around it, there are stone carvings of the sun, the moon and the stars symbolizing the pregnancy of St. Virgin Maria in a flash of light. Under the bronze doze is a picture of Holy Son – Infant Jesus Christ surrounded with stone carvings of the tools for implementation of Crucifixion (the whip, crown of thorns, nails, ladder and spear).

Right in the middle of the third floor is carved the statue of St. Virgin Maria being assumed bodily into heaven along with angels and surrounded with peony and chrysanthemum on both sides, respectively representing China and Japan. On the left are carved “Eternal Crowd”, a “Sailing Boat in Portuguese Style” (represents the church) guided by the ‘star’ thru the storm (sin) and a “Monster with Ferocious Features”. On the right are carved statues of the Life of Tree and St. Maria conquering the seven headed hydra monster and piercing through the death’s head, all of which symbolizes the conquest of death. The Chinese character next to her read “the holy mother tramples the heads of the dragon”.

Below the third floor lies a niche floor, on which there is a statue of four figures with Jesus meeting with the sage. The four Jesuit doctors of the Church are Blessed Francisco de Borja, St Ignatius Loyola (the founder of the order), St Francis Xavier (apostle of the Far East) and Blessed Luis Gonzaga.

At the bottom of the ruined facade are three doors. On the main door is inscribed the Latin words MATER DEI, representing Goddess St. Maria. On both sides of it is inscribed the mark “HIS” of Jesus Christ.

On the whole, the front wall has two sets of meanings. One, at the two floors of the architecture below in the form of a square, reflects the work of the disciples of the Jesuits and the missionaries belonging to the sect of This Life Christian Church who travel around the world for missionary work. The other one in the form of a triangle mainly represents the saints model of three saints (Holy Father, Jesus Christ and Holy God) and Virgin St Maria praying for mankind in the presence of God. 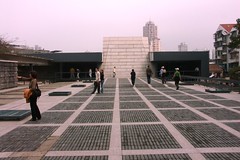 After the facade supposed to be the interior of the Cathedral of Saint Paul, which had been destroyed. There are labels at the side to describe and illustrate how will it looks like in ancient times. The nave is laid out on the gridded pavement, with glass display cases showing objects excavated from the grounds.

During the 1990 to 1995, a large-scale restoration work was carried out by Macau government. After restoration, the backside of the Ruins of St. Paul’s was turned into a museum, where exhibits of paintings, sculptures and liturgical objects from churches and monasteries in Macau were stored. 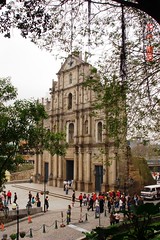 View of Ruins of Cathedral of Saint Paul from nearby hill. 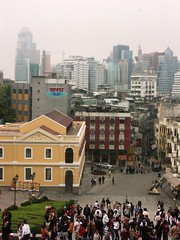 A metal catwalk attached to the back of the facade stands in for the choir loft. It’s possible to climb up the stairs to top of the facade and look through the archways for some interesting views of the immediate surroundings. It is customary to throw coins into the top window of the ruins from the stairs, for luck. But I didn’t know that until now. 🙂