Since 23rd March 2006, all domestic and international AirAsia flights will be at LCC (Low Cost Carrier) Terminal of Malaysia Kuala Lumpur International Airport (KLIA). The LCC Terminal is located about 20 km away from KLIA main terminal building. The two terminal are actually using the same runway for aircrafts’ taking off and landing, so why the two terminals are built so far apart is beyond my comprehend.

Worse still, if you go around the two KLIA’s terminals with its shuttle bus, it costs RM 1.50 1 way per person (free until 30 April 2006). For comparison, shuttle bus between Singapore Changi Airport Terminal 2 and Budget Terminal is free. Anyway, the shuttle bus service is located at Platform 8, bus station at Ground Floor, Car Park C, KLIA. 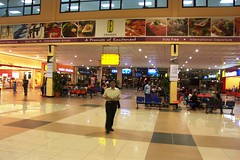 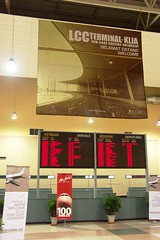 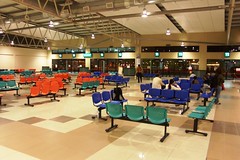 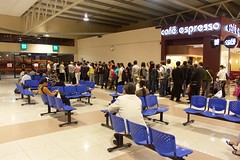 I have heard lots of people said that getting into the Air Asia’s aircraft takes a bit of effort, as passengers of AirAsia usually will rush to the plane as if there’re no seat left for them. It seems to be true. Half an hour to go, the queue already getting long. If the queue was orderly then it’ll be great. However, the flight was delayed for about half an hour, so everybody, may be had already standing for too long, left the queue and took a sit. When the boarding time finally start, everybody just rushed to the door, ignoring existing queue.

Beside, elders and children must get noticed in order to qualify for priority boarding. Air Asia staff will search for elders and children only when at boarding time, and with everybody surrounding them, so you can bet that only those in front will get noticed. So that’s what happened to my parents, have to wait patiently. 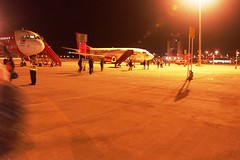 There are no aerobridges (also called jetway or jet bridge) to connect the terminal to the airplane so that passengers can board the plane without leaving the terminal building. To board the AirAsia airplane, passengers have to walk along ground-level tarmac and climb a set of movable stairs.

The distance from the LCC Terminal bulding to the aircraft is quite a distance, almost 50 meters away, and risks accident with airport vehicles as the vehicles’ route crosses with passengers’ walking route. And I can imagine what will happen if it’s raining.