Old Quarter is located at Hoan Kiem district, and known as Pho Co in Vietnamese. Enclosed by Ha Noi Citadel, Hoan Kiem Lake and the Red River, the Old quarter is also famously known as the 36 Pho Puong (36 streets), and its history spans 2000 years. In the 13th century, 36 guilds established themselves here with each taking a different street. Street names reflect the type of merchandise being made/sold. Nowadays, some of the streets have taken up new commodities, but still cluster together along a single street – Hang Can (once scales, now stationary), Hang Dau (once oil, now shoes), Hang Buom (once sailcloth, nowconfectioneryy and wine) and Thuoc Bac (once medicine, now tools), for example. While some still retain the names as of the original trades â€“ Hang Ma (Votive Paper Decorations Street), Hang Gai (Silk Street), Hang Thiec (Tin Street), and Hang Dong (Bronze Street).

Actually there is now more than 70 streets in Old Quarter. Some researchers believe that the number 36 came from the 15th century when there might have been 36 guild locations, which were workshop areas, not streets. When streets were later developed, the guild names were applied to the streets. Others attribute the 36 to a more abstract concept. The number nine in Asia represents the concept of “plenty”. Nine times the four directions makes 36, which simply means “many”. Most street name starts with “Hang”, which means merchandise or shop. 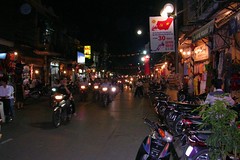 Hang Ngang (Transversal Street) is lively at night, has a lot of shops selling clothes. 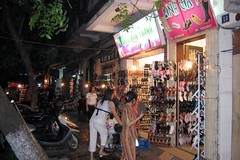 Cau Go Street, which means “Wooden Bridge”, is located one block north of the Lake of the Restored Sword (Hoan Kiem Lake), and was in fact the location of a wooden bridge. About 150 years ago, the bridge crossed a thin stream of water connecting the Thai Cuc Lake with the Lake of the Restored Sword. Dyers from the neighboring Silk Street (Hang Dao / Hang Gai) set out their silk to dry or bleached their fabric beside the bridge. Under the French occupation, the lake and stream were filled as health measures and to increase buildable land. The little wooden bridge became a regular street. 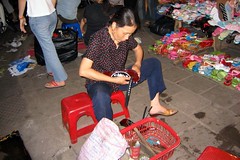 Immediately assembled the shoe for the customers.