I went back to Central Hotel after walking for a while, and my family had finished packing their luggage. We’re checking out from the hotel to go to Hong Kong now by ferry. The ladies that manned the reception during out checked out were very friendly, unlike the old guy during the midnight. As I mentioned about the Central Hotel, the ladies gave us clear direction on which bus to take to go to the Jetfoil Terminal, the main ferry terminal to Hong Kong, exchanged our Hong Kong notes to small coins to pay the fares, and even explained that we have to pay a MOP $0.50 more (actually was HKD 50 cents, as we didn’t have any Macau money), as they didn’t have 50 cents coins, and each ticket within Macau Peninsula costs MOP (or HKD) 2.50.

The bus stop along Avenida de Almeida Ribeiro is just about less than 1 minute walk from Central Hotel. The bus stop has a sign board display the number of the buses that service along the road and their ply routes and destinations. 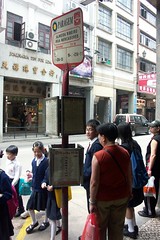 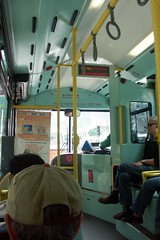 The receptionist of Central Hotel asked us to take bus 10a, which went straight to Jetfoil Terminal. To my surprise, the interior of the bus was very clean, with automatic door. Actually I shouldn’t surprise, as Macau is highly developed country too. The driver was very friendly too, and unlikely bus drivers in Singapore, he is young. 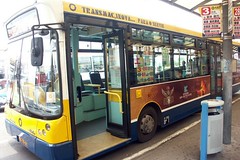 The bus 10a from Macau bus company TCM. The 10a bus route covers most of the Macau city centre including most hotels and casinos such as Casino Lisboa and Sands Macau. Actually most of the casino hotels are located close to each other in the city centre, walking will be able to reach most of them without the need of buses. 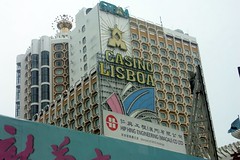 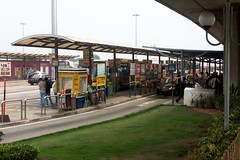 Bus station and taxi station at Jetfoil Terminal, the main ferry terminal for ferry departing and arriving from Hong Kong, which closely linked with Jetfoil Terminal building. We’re been dropped off here.