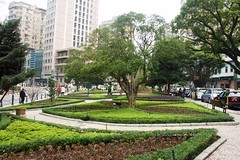 There are plenty of gardens and parks in Macau, big and small. As the convergence of the East and the West, gardens provide all members of the community with relaxation, recreation and relief from the crowded, busy city.
END_OF_DOCUMENT_TOKEN_TO_BE_REPLACED

Macau Cathedral is located at Largo da Se, east of Largo do Senado. The cathedral that currently stands was consecrated in 1850 to replace an earlier cathedral badly damaged in typhoon. It was then completely rebuilt in 1937. 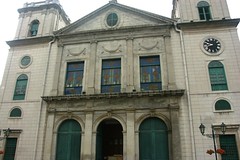 Exterior of Macau Cathedral with some notable stained-glass windows. The cathedral is the focal point for most Christian festivals and holy days in Macau.
END_OF_DOCUMENT_TOKEN_TO_BE_REPLACED

Macau has even been famous for been a shopping paradise compared with its fame in gambling and casino entertainment. However, if you insists on going on shopping spree in Macau, Central Macau offers plenty of opportunities. Main shopping district in Central Macau all centred around Largo do Senado along Avenida do Infante Dom Henrique and Avenida de Almeida Ribeiro. Other shopping areas include Rua da Palha, Rua do Campo and Rua Pedro Nolasco da Silva. Actually, Macau is pretty small, so most of the places are near to each others. 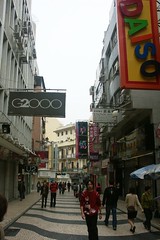 Shop houses around Rua de Sao Domingos, north of Largo do Senado. Here you can find all sorts of shops selling variety of goods, and of course, delicious food and drink stalls.
END_OF_DOCUMENT_TOKEN_TO_BE_REPLACED 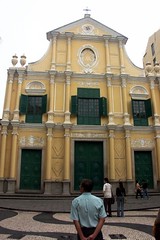 St. Dominic Church is located at right behind Largo do Senado at Largo de Sao Domingos (Dominic’s Square). It was built in early 17th century to replace a chapel built by the Dominicans in the 1590s. It was recently renovated in 1997.
END_OF_DOCUMENT_TOKEN_TO_BE_REPLACED 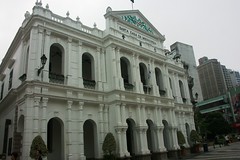 Baroque facade of the Santa Casa da Misericordia (Holy House of Mercy), located right beside Largo do Senado, which was established 1568 (in the 3rd year of the reign of Emperor Long Qing, Ming dynasty) by D. Belchior Carneiro, the first Catholic Bishop of Macau and is the oldest European charity instituition on China. It’s renovated in 1905. Holy House of Mercy of Macau was also engaged in relief and charity work for the Portuguese community in Macau. 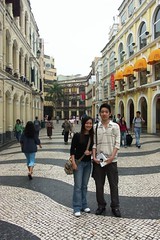 My brother Leng Ping and his girlfriend at Largo do Senado

Largo do Senado located at the central of Avenida de Almeida Ribiero (more commonly known locally as San Ma Lo which means new street in Cantonese) in Central Macau Peninsular, is also providing the city’s focal point and is the start of most tourist’s exploration of Macau. And it’s also the starting point of our walking tour of Macau city.
END_OF_DOCUMENT_TOKEN_TO_BE_REPLACED

I initially planned to follow the Macau Peninsula Walking Tour suggested by Lonely Planet and several other Chinese guidebooks, which will bring us to, among others, Largo do Senado, Museum of the Holy House of Mercy, Church of St Dominic, Macau Cathedral, the Consulate General of Portugal, Monte Fort, Macau Museum, ruins of the College of the Mother of God, Church of St Paul, Pawnshop Museum, Cultural Club, Leal Senado, Church of St. Augustine, Dom Pedro V Theatre, Largo do Lilau and A-Ma Temple.

But we quickly lost our way. The walking map was pretty detail, but at some point we still unable to figure out where were we now. Beside, along the walking route, most of the sights are churches and some colonial buildings that my family is of not much interest in. So I decided to straight some famous and important landmarks straight away.
END_OF_DOCUMENT_TOKEN_TO_BE_REPLACED

Initially, Siew Tee wanted to go to Hong Kong Disneyland on today (Friday) itself to take advantage of cheaper Disneyland admission ticket price and fewer crowd in the theme park. So we should have go to Hong Kong by ferry early in the morning. By everybody was so tired that we only woke up at 9 am.

So we decided to go to Disneyland on last day of our trip instead, that’s on Monday. So now we have some time to visit interesting places in Macau before going to Hong Kong in the afternoon.

“The tired old Central Hotel has seen better days, but it is just what its name suggests – a short hop northwest of Largo do Senado” – Lonely Planet

The flight from Kuala Lumpur, Malaysia to Macau took about 3 hours and 35 minutes, a little bit shorter than originally scheduled. However, we still arrived in Macau at wee hour of the day, at 2.30 midnight.

Macau International Airport is a small airport with just limited flights and airlines servicing. Our flight was the last flight scheduled to arrive for the day – all the following inbound and outbound flights are for the next morning. So most shops, including duty-free shops and establishments were closed, and the airport was almost empty except for immigration officers, security officers, money changer and a information counter staff. Of course, outside of airport, there were taxi drivers who are waiting for expected customers.
END_OF_DOCUMENT_TOKEN_TO_BE_REPLACED