Monte Fort was built by Jesuits between 1617 and 1626 as part of the College of the Mother of God. The fort was designed to survive a two-year siege with barracks and storehouses, but it never been used as such. The cannons were fired only once during the aborted attempt by the Dutch to invade Macau in 1622. 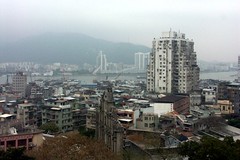 Been to Monte Fort was rewarded with fascinating view of the surrounding of Macau and also neighbouring China. So bring your binoculars. Too bad when we were there, the mist were pretty thick. 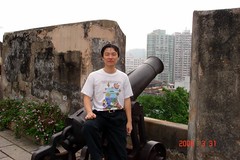 On a cannon of the Monte Fort, which ever been used only once.